6.10
0.050 (0.83%)
Real-Time
Market Open
6.10
Polygon (MATIC) Price Rallies As Whales Supply The Fuel
04 November 2022 - 11:11PM
NEWSBTC
Polygon (MATIC) is one of the biggest winners in the crypto market today, with a 15% price increase over the last 24 hours. As NewsBTC reported yesterday, MATIC gave a golden cross signal on the daily chart a few days ago. The last time MATICUSD posted this significant trading signal on the daily chart, the altcoin recorded a massive rally of more than 13,000%. Related Reading: MATIC On The Move After Polygon Tapped By META | MATICUSD November 3, 2022 MATIC had been trading in a sideways channel since mid-July. After the golden cross formed on October 20, MATIC showed small strength. However, the explosive breakout from the sideways channel was triggered by fundamentals and probably whales scooping up MATIC. After the announcement that META will use Polygon for Instagram NFTs, the price soared by more than 20% within one day and was able to overcome the 4-month high at $1.06. Unsurprisingly, after Polygon’s explosive move (MATIC), the RSI is currently at 75 and thus in the overbought zone. A retest of the $1.06 level would thus be healthy for the market before the rally may find a continuation. Meanwhile, on-chain analysis firm Sanitment has released data showing that whales have front-runned the pump. In an analysis, Santiment said that “a mid-October spike in Polygon holdings by 10m+ $MATIC whales may have foreshadowed this”. Regarding the recent move, Santiment said that yesterday “marked the highest amount of $100k+ whale transactions since February for the 11th”. Fundamentals of Polygon Backing A Continuation Of The MATIC Rallye Most notably, recent announcements from Instagram and JPMorgan have turned the spotlight on Polygon (MATIC). However, Polygon’s list of high-profile partners has been growing fast recently. In particular, Meta’s announcement caused a stir, as Polygon will be the very first partner in the NFT space for Instagram, as Bitcoinist reported. No less sensational, however, was JP Morgan’s announcement of its first live trade worth about $71,000 on a public blockchain using Polygon. Related Reading: Polygon Price Could Aim For These Levels Before The Bulls Wane Off In addition, Polygon recently set a new record with 6 million active wallets. Especially the partnership with Reddit has played a significant role in this success. However, the list of renowned Polygon partners is much longer. They include Robinhood, Starbucks, Walt Disney Co, Stripe, eBay, NFL, Circle, Tether, Adidas, Prada, Adobe, Liverpool FC, Telefonica, Sequoia Capital, ApeCoin, Givenchy, Bulgari, SportFive, ShoppingIO, Mercedes-Benz Group, BitPay, Axelar and many more.
ApeCoin (COIN:APEUSD)
Historical Stock Chart
From Dec 2022 to Jan 2023 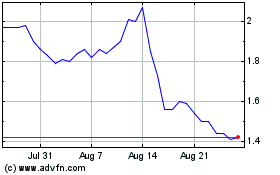 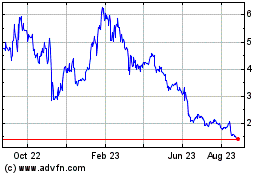 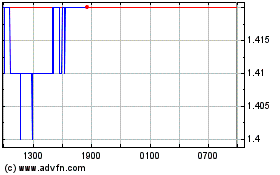