17.12
-0.260 (-1.50%)
Real-Time
Market Open
17.12
TRON (TRX) TVL Accelerates To Nearly $2 Billion Last Month
08 August 2022 - 02:23PM
NEWSBTC
TRON (TRX) continues to gain traction despite the current erratic market movement. TRX has recently seen TVL growth by $6 billion in July which is by far due to a revival of investor interest specifically in DeFi. TRON has been the most-supported DeFi smart contracts seen in the past two years. In fact, blockchain has accelerated by 49% in terms of TVL as observed in July. In fact, July growth was exponential as TRON’s TVL was seen to surge from $3.95 billion on July 1 to $5.91 billion at the end of July. TRON was establish in 2017 by Founder Justin Sun. TRX is seen to be a highly-acclaimed project that is profound in terms of scalability. This protocol is ambitious and designed in creating a specialized infrastructure for a completely decentralized type of internet.   Related Reading: Optimism Price Bloats 25% – OP Seen Ballooning In Coming Days TRON: More TVL Than Polygon, Solana, Avalanche TRON was originally an ERC20 token built in Ethereum’s ecosystem. However, due to issues with scalability that is linked to Ethereum’s overtly expensive gas fees, TRON announced that they would be moving forward with a new peer-to-peer network in 2018. TRON TVL increased in July because of the increase of dApps in the ecosystem. In fact, JustLend, a DeFi, increased by as much as 19% the previous. More so, JustStables (USDJ) also soared to more than 2% following the same period. In addition, decentralized exchanges that include UniFi and SocialSwap also spiked by a whopping 550% and 6%; respectively.   TRON is said to have more TVL compared to Polygon, Solana, and Avalanche. TRX is said to have move to the third spot following Ethereum and Binance Smart Chain. TRON Switches To Bearish Mode TRX started July trading at $0.06479 and ended the month at $0.06894. In general, this showed a boost of 6% covering the opening and closing price of TRX. The bears were trying so hard to penetrate the market but the bulls didn’t let as they pumped the price further up. The bears do need to get their act together so they can tilt the token price in their favor. The coin was going the bullish trend from August 2 but the bears were able to slice into the trade on August 4 as the bulls were able to push the price up on the daily chart. According to CoinMarketCap, TRON is down by 0.41% or $0.06965 as of this writing. If the bulls can reenter by force and turn the tables around then the bears may lose it to the bulls. However, if the bears can push the price down, then this will render more damage for the bulls so they’ll keep pushing back. With these opposing forces, the price could break at the support zone of $0.0669 and the price may fall to its next support at $0.0627. Related Reading: Shiba Inu Displays Surprising Price Movement – Can SHIB Ditch The Flatline? TRON total market cap at $384 billion on the daily chart | Source: TradingView.com Featured image from MyConstant, chart from TradingView.com
Avalanche (COIN:AVAXUSD)
Historical Stock Chart
From Sep 2022 to Oct 2022 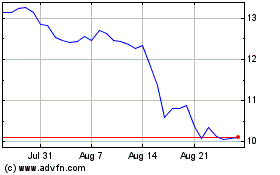 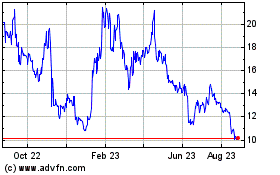 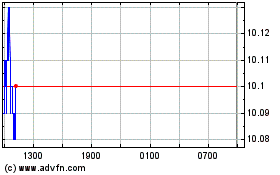