144.58
1.43 (1.00%)
Real-Time
Market Open
144.58
Crypto Is Set To Dominate Australian Financial Industry In Less Than 10 Years
06 September 2021 - 03:00AM
NEWSBTC
Crypto experts have said that Australia’s finance industry is set to be dominated by cryptocurrency by 2029. Finder’s annual cryptocurrency report shows that crypto is set to replace the traditional finance industry in Australia. The Finder’s report brought to light some interesting facts about cryptocurrency adoption in the country. These, experts say, put it on track for widespread adoption in the country. Australians Are Turning Their Attention To Crypto In Australia, 17% of the population have said that they own some kind of cryptocurrency. The most popular being the top coins like Bitcoin and Ethereum. A further 13% of Australians said that they plan to purchase and own crypto within the next year. A reported 9% of Australians surveyed said they owned bitcoin. While 8% said that they hold Ethereum. Dogecoin came in third with 5% saying they held the meme coin. And Bitcoin Cash was held by a reported 4% of the people surveyed. Related Reading | Crypto Needs Regulation If It’s Going To Survive, Says SEC Boss The biggest group that held the most crypto was Gen Z. Gen Z are classified as people who were born starting the year 1997 to the present. Which puts the oldest Gen Zs at 24 years old. 31% of this group confirmed that they held some type of cryptocurrency. Showing a growing trend among young people who are more inclined to invest in digital assets than in traditional assets. Compared to the younger group, crypto ownership is down among older investors. “If the pace of education continues to grow, combined with easier access to cryptocurrencies, we should expect to see it as a dominant financial industry by the end of the decade. Especially among younger generations who have never had meaningful access to traditional finance.” Cryptocurrencies Set To Explode The impact of cryptos on most economies in the world cannot be understated. Still only in its early stages, crypto has resonated with millions of people around the world. Countries with weaker currencies have seen more adoption. As citizens use cryptocurrencies as an alternative store of value compared to their fiat currencies. Traditional finance products now have to face an even bigger threat, decentralized finance. With fewer young people getting exposure to traditional financial markets, they are turning to the crypto market as a way to invest. Its ease of use and complete ownership of the assets have often been cited as the major reason for investing in the assets. And this is why young people are drawn to it. Related Reading | New To Bitcoin? Learn To Trade Crypto With The NewsBTC Trading Course “As the technology develops and there are easier ways to access it, like in the Finder app where you can buy Bitcoin and Ethereum in a few clicks, I believe the growth in cryptocurrency will explode,” said James Edwards, Finder’s cryptocurrency expert. Edwards went on to add, “Many Aussies are now much more clear on the benefits cryptocurrencies offer, such as Bitcoin being a hedge against fiat currency and inflation. Play the ability to earn interest on assets through things like stablecoins and decentralized finance on Ethereum.” Crypto total market cap heading towards $2.3 trillion | Crypto Total Market Cap on TradingView.com Featured image from Bitcoinist, chart from TradingView.com
Bitcoin Cash (COIN:BCHUSD)
Historical Stock Chart
From Jul 2022 to Aug 2022 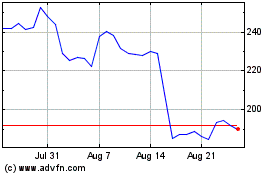 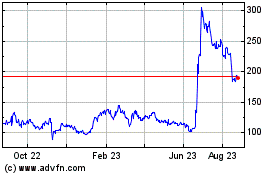