1.12
0.020 (1.82%)
Real-Time
Market Open
1.12
Jack Dorsey Gets Slammed by Twitter’s Crypto Crowd For Web3 Critique
24 December 2021 - 03:32AM
NEWSBTC
Twitter boss Jack Dorsey kicked off a major storm this week, attacking an idea that cryptocurrency enthusiasts widely believe will lead to a new dawn for decentralized finance and the internet – the coming of web3. Proponents of web3 hail it as a major revolution of the internet, bringing back control and ownership of information and assets exchanged over the web to the people. With that promise, it will also kill off the role of many of the giants that dominate the Internet today – namely the likes of Facebook, YouTube and Twitter. But Dorsey suggested in a tweet – which has been retweeted almost 7,000 times – that at the moment, web3 is more of a marketing ploy than anything else: You don’t own “web3.” The VCs and their LPs do. It will never escape their incentives. It’s ultimately a centralized entity with a different label. Know what you’re getting into… — jack⚡️ (@jack) December 21, 2021 What Dorsey is saying is that not even web3 has what’s required to escape the influence of the venture capitalists and liquidity providers that run the worldwide web today. The tweet was quickly met with an angry backlash from the thousands of developers who’re working night and day to create a web3 entity that is precisely what Dorsey says it won’t be – an entity free from the influence of VCs. Quickly there emerged a chorus of voices calling out Dorsey for crushing the hopes and dreams of multiple brave people, with others claiming that in his naivete he simply doesn’t understand what is going on with web3 and therefore his comments should just be ignored. Tesla founder Elon Musk, ever eager to play a part in all debates crypto, chirped in with a snarky comment that underscores how the very definition of web3 is still up for debate: Has anyone seen web3? I can’t find it. — Elon Musk (@elonmusk) December 21, 2021   A more informed reply came from Willy Woo, an on-chain analyst with a big following in the crypto community who obviously does know what’s up with web3. In Woo’s opinion we’ve already seen the power of web3 and how it enables people to wrest back control of a project when they don’t like the direction it’s headed. If they are truly open protocols, if the incentives get too perverse, the community rips the network away from the founder/VC coalition. It's the community that powers these networks. E.g. 2014 CryptNote to Monero relaunch or the recent community vs Brock Pierce battle on EOS. — Willy Woo (@woonomic) December 21, 2021   Woo was of course referring to the recent battle between the community at EOS (led by the recently-formed EOS Network Foundation) and its main developer, Block.One. Concerned by Block.One’s clear lack of commitment to the EOS project, which has struggled to capitalize on its blockbuster $4 billion ICO in 2018, the community earlier this month voted overwhelmingly to kick Block.One from its role leading the project, in the process blocking it from receiving any more payments. Block.One had been set to receive 67 million EOS tokens ($250 million) over the next six-to-seven years, but the community decided it wasn’t working hard enough and didn’t deserve that money – so it dropped it altogether. If that’s not a show of the power of web3, it’s hard to know what is. The lack of any kind of response or fight back from Block.One only serves to emphasize how little power it has when the community’s support is pulled out from under its feet. “Through a super-majority consensus, the EOS network has taken its future in its own hands by voting to fire Block.one and stop vesting tokens to them. This begins a new era for EOS and highlights the power of the blockchain to enable a community to stand up against corporate interests that don’t align with theirs,” said Yves La Rose, leader of the EOS Network Foundation. As it turned out, the response of the furious Twitterati eventually prompted Dorsey to contradict himself while attempting to show that his tweet was intended more as a “critique” that might help the community to fix any outstanding issues. We have bigger issues if a tweet stifles hopes and dreams. Currently it’s not wrong. Critique can help fix, or divert energy to something more important. — jack⚡️ (@jack) December 21, 2021   So if web3 is not wrong, then how can Dorsey be right?
EOS (COIN:EOSUSD)
Historical Stock Chart
From Jan 2023 to Feb 2023 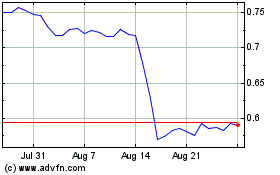 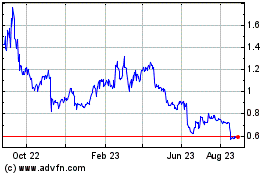 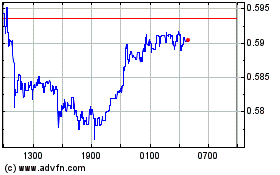