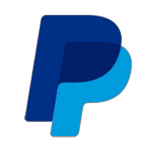 102.08
0.00 (0.0%)
Upgrade to Real-Time
Afterhours (Closed)
102.08
Current Report Filing (8-k)
18 June 2022 - 06:40AM
Edgar (US Regulatory)
0001633917false00016339172022-06-152022-06-15
UNITED STATES SECURITIES AND EXCHANGE COMMISSION
Washington, D.C. 20549
FORM 8-K
CURRENT REPORT
Pursuant to Section 13 or 15(d) of
the Securities Exchange Act of 1934
Date of Report (Date of earliest event reported): June 15, 2022
PayPal Holdings, Inc.
(Exact name of registrant as specified in its charter)
2211 North First Street
San Jose, CA 95131
(Address of principal executive offices)
(408) 967-1000
(Registrant’s telephone number, including area code)
Not Applicable
(Former name or former address, if changed since last report.)
Check the appropriate box below if the Form 8-K filing is intended to simultaneously satisfy the filing obligation of the registrant under any of the following provisions (see General Instruction A.2. below):
☐    Written communications pursuant to Rule 425 under the Securities Act (17 CFR 230.425)
☐    Soliciting material pursuant to Rule 14a-12 under the Exchange Act (17 CFR 240.14a-12)
☐    Pre-commencement communications pursuant to Rule 14d-2(b) under the Exchange Act (17 CFR 240.14d-2(b))
☐    Pre-commencement communications pursuant to Rule 13e-4(c) under the Exchange Act (17 CFR 240.13e-4(c))
Securities registered pursuant to Section 12(b) of the Act:
Indicate by check mark whether the registrant is an emerging growth company as defined in Rule 405 of the Securities Act of 1933 (§230.405 of this chapter) or Rule 12b-2 of the Securities Exchange Act of 1934 (§240.12b-2 of this chapter).
Emerging growth company ☐
If an emerging growth company, indicate by check mark if the registrant has elected not to use the extended transition period for complying with any new or revised financial accounting standards provided pursuant to Section 13(a) of the Exchange Act. ¨
Item 5.02. Departure of Directors or Certain Officers; Election of Directors; Appointment of Certain Officers; Compensatory Arrangements of Certain Officers.
On June 15, 2022, the Compensation Committee of the Board of Directors of PayPal Holdings, Inc. (the “Company”) approved the terms of a letter agreement dated June 15, 2022 between the Company and Gabrielle Rabinovitch (the “Letter Agreement”) in connection with Ms. Rabinovitch’s previously announced appointment as the Company’s interim Chief Financial Officer, including the following:
•RSU Grant: Ms. Rabinovitch was granted a service-based restricted stock unit award with a grant date value of $1.5 million (the “RSU Grant”) under the Company’s Amended and Restated 2015 Equity Incentive Award Plan (the “Plan”), effective as of June 15, 2022 (the “Grant Date”). The RSU Grant will vest over three years from the Grant Date: one-third of such grant will vest on the first anniversary of the Grant Date and the remainder will vest in eight equal quarterly installments thereafter, subject to Ms. Rabinovitch’s continued employment with the Company on each applicable vesting date.
•PBRSU Grant: Ms. Rabinovitch was granted a performance-based restricted stock unit award with a target grant date value of $1.5 million (the “PBRSU Grant”) under the Plan, effective as of the Grant Date. The PBRSU Grant will vest on March 1, 2025, with the number of shares issuable in respect of such award to be determined in accordance with the achievement of Company performance conditions set forth in the underlying award agreement, based on the same performance metrics that apply generally to Company executives for the 2022-2024 performance period, subject to Ms. Rabinovitch’s continued employment with the Company on the vesting date.
•Bonus: Ms. Rabinovitch was awarded a cash retention bonus (the “Bonus”) with an aggregate value of $1,000,000, with half of such amount to be paid shortly following the date of the Letter Agreement and the remainder to be paid shortly following the earlier of (i) the second month anniversary of the start date of the Company’s permanent or successor Chief Financial Officer and (ii) March 1, 2023, subject, in each case, to Ms. Rabinovitch’s continued employment with the Company on the applicable payment date.
•Severance Protection: During the period commencing on May 23, 2022 and ending on the sixth month anniversary of the start date of the Company's permanent or successor Chief Financial Officer (such period, the “Transition Period”), Ms. Rabinovitch will be eligible to participate in the PayPal Holdings, Inc. Executive Change in Control and Severance Plan (as it may be amended and restated from time to time, the “Severance Plan”) at the Executive Vice President level, subject to the terms and conditions of the Severance Plan and as set forth in the Letter Agreement. Such eligibility is contingent on Ms. Rabinovitch’s continuous reasonable best efforts to support the permanent or successor Chief Financial Officer in their transition until the sixth month anniversary of their start date, unless otherwise determined by the Company in its sole discretion. If the Transition Period expires while Ms. Rabinovitch remains employed with the Company, her eligibility to receive severance from the Company in the future (if any) will return to the Senior Vice President level, unless otherwise determined by the Company in its sole discretion. Additionally, the following occurrences will not constitute “Good Reason” with respect to Ms. Rabinovitch under the Severance Plan: (i) a return to a role or title similar to or the same as the role and title that Ms. Rabinovitch held prior to May 23, 2022; and/or (ii) a change in Ms. Rabinovitch’s reporting relationship such that she no longer reports to the Company's Chief Executive Officer and/or such that she is required to report to the Company's Chief Financial Officer.
The foregoing description of the Letter Agreement is qualified in its entirety by reference to the text of the Letter Agreement, which is filed as Exhibit 10.1 and incorporated herein by reference.

Item 9.01. Financial Statements and Exhibits
(d) Exhibits
SIGNATURES
Pursuant to the requirements of the Securities Exchange Act of 1934, the registrant has duly caused this report to be signed on its behalf by the undersigned hereunto duly authorized.
PayPal (NASDAQ:PYPL)
Historical Stock Chart
From Jul 2022 to Aug 2022 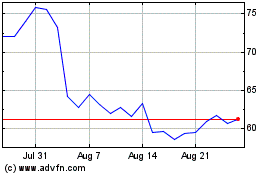 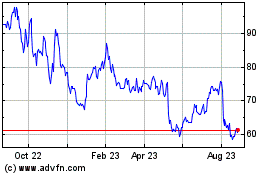 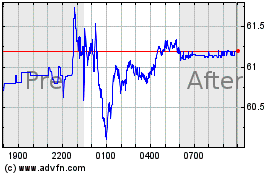