FURTHER, THIS ANNOUNCEMENT IS MADE FOR INFORMATION PURPOSES ONLY AND DOES NOT CONSTITUTE AN OFFER TO SELL OR ISSUE OR SOLICITATION TO BUY, SUBSCRIBE FOR OR OTHERWISE ACQUIRE SHARES IN WESTMINSTER GROUP PLC IN ANY JURISDICTION IN WHICH ANY SUCH OFFER OR SOLICITATION WOULD BE UNLAWFUL.

THIS ANNOUNCEMENT CONTAINS INSIDE INFORMATION AS STIPULATED UNDER THE UK VERSION OF THE MARKET ABUSE REGULATION (EU NO. 596/2014) AS IT FORMS PART OF UK LAW BY VIRTUE OF THE EUROPEAN UNION (WITHDRAWAL) ACT 2018.

("Westminster" or the "Company")

Result of Placing to raise GBP2.5m

Westminster Group plc (AIM: WSG), a leading supplier of managed services and technology-based security solutions worldwide, is pleased to announce that, further to the announcement made yesterday, the Company has conditionally raised gross proceeds of GBP2.5 million by the placing of 43,859,649 Placing Shares, at a price of 5.7 pence per Placing Share (the "Issue Price"). The Placing was oversubscribed and led by strong institutional demand. The Placing is being carried out using the Company's existing shareholder authorities.

The Placing Shares will be issued credited as fully paid and will, on issue, rank pari passu in all respects with the existing issued Ordinary Shares, including the right to receive all dividends and other distributions thereafter declared, made or paid on the same.

The Placing was conducted through an accelerated bookbuild process undertaken by Arden Partners PLC ("Arden") acting as sole bookrunner and broker to the Company.

"I am encouraged by signs travel restrictions may, at last, be beginning to ease in a number of regions and that some of our delayed projects are once again beginning to move forward. This has been amply demonstrated by two recent major long-term contract awards and advances in other near-term prospects.

"I am also encouraged by the strong institutional and shareholder support that has driven this fundraise at a premium to the mid-market price and I am pleased to welcome new institutional investment. I believe this fundraise further strengthens our ability to deliver on our growing pipeline of opportunities."

Application is being made for the 43,859,649 Placing Shares to be admitted to trading on AIM and it is anticipated that admission of the Placing Shares will occur at 8.00 a.m. on or around 23 June 2021.

Capitalised terms not otherwise defined in this announcement shall have the same meaning ascribed to such terms in the announcement released yesterday unless the context requires otherwise.

This Announcement does not constitute, or form part of, a prospectus relating to the Company, nor does it constitute or contain any invitation or offer to any person, or any public offer, to subscribe for, purchase or otherwise acquire any shares in the Company or advise persons to do so in any jurisdiction, nor shall it, or any part of it form the basis of or be relied on in connection with any contract or as an inducement to enter into any contract or commitment with the Company.

Arden Partners PLC, which is a member of the London Stock Exchange, is authorised and regulated in the United Kingdom by the FCA and is acting as broker and bookrunner in connection with the Placing. Arden is acting exclusively for the Company in connection with the matters referred to in this Announcement and for no-one else and will not be responsible to anyone other than the Company for providing the protections afforded to their respective clients, nor for providing any advice in relation to the contents of this Announcement or any transaction, arrangement or matter referred to herein.

Westminster Group plc is a specialist security and services group operating worldwide via an extensive international network of agents and offices in over 50 countries.

Westminster 's principal activity is the design, supply and ongoing support of advanced technology security solutions, encompassing a wide range of surveillance, detection (including Fever Detection), tracking and interception technologies and the provision of long-term managed services contracts such as the management and running of complete security services and solutions in airports, ports and other such facilities together with the provision of manpower, consultancy and training services. The majority of its customer base, by value, comprises governments and government agencies, non-governmental organisations (NGO's) and blue-chip commercial organisations.

The Foundation's goal is to support the communities in which the Group operates by working with local partners and other established charities to provide goods or services for the relief of poverty and the advancement of education and healthcare particularly in the developing world.

The Westminster Group Foundation is a Charitable Incorporated Organisation, CIO, registered with the Charities Commission number 1158653.

, the news service of the London Stock Exchange. RNS is approved by the Financial Conduct Authority to act as a Primary Information Provider in the United Kingdom. Terms and conditions relating to the use and distribution of this information may apply. For further information, please contact rns@lseg.com or visit www.rns.com.

Westminster (LSE:WSG)
Historical Stock Chart
From Apr 2022 to May 2022 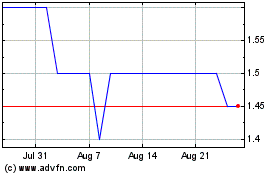 Westminster (LSE:WSG)
Historical Stock Chart
From May 2021 to May 2022 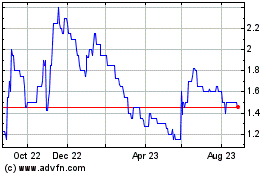 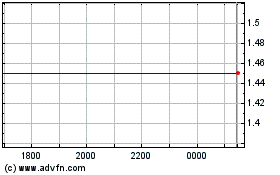