0.00000918
-0.00000003 (-0.33%)
Real-Time
Market Open
0.00000918
SHIB On Fire – And A Bull Run Could Be Around The Corner – Here’s Why
17 August 2022 - 03:13PM
NEWSBTC
Shiba Inu (SHIB) price has spiked by over 30%, signifying a bull run may not be far away. SHIB price surged by over 30% on August 14 Shiba Inu trading volume peaked to 700% yesterday; highest since April 12 SHIB registers extended period of MDIA which means traders must exercise caution SHIB price has peaked to as high as $0.00017, which is considerably the highest it has been since May 10. More so, trading volume has also climbed to 700% over the weekend which is the highest registered since April 12. Shiba Inu network registered a huge uptrend in whale transactions soaring to as much as $100,000 as seen in August trading session. Considerably, around 400 whale transactions were done catapulting to a record-breaking transactions amounting to more than $100,000 that SHIB was able to log in the past few months. Related Reading: Polygon Seen Breaching $1 This Week – Can MATIC Start An Uptrend? SHIB Daily Chart Shows Premature Bull Run Judging by the movement of SHIB on the daily chart, it seems that the price spike seen over the weekend is a premature call for a bull run. With the MFI and RSI chartering the overbought zones, the MACD position isn’t showing any potential bull run. Apparently, there were no intersections seen between the trend lines and MACD that could hint a gigantic uptrend. According to CoinMarketCap, SHIB is up by 2.72% or trading at $0.00001619 as of this writing. Despite the coin soaring in value overnight, the MVRV for 1D is low at -7.498% which hints that only a few investors gained profit from the price rally yesterday. On the other hand, the MVRV for 30D is seen to be positive at +28.32%. SHIB Shows Extended MDIA Another metric to be considered by investors is the MDIA or Mean Dollar Invested Age which refers to the mean or average of all the tokens and/or coins on the blockchain based on price. When the MDIA increases, it signifies that the tokens are lying dormant in wallets. An extended period of MDIA uptrend warns that the network is in a lull or stagnant phase which will make it extremely hard to push the price up. Shiba Inu’s MDIA shows that its MDIA has been stretched for a long time or six months at most. With that being said, traders must always be cautious in taking trading positions because the MDIA indicates that SHIB may fall. Another dog meme coin, Dogecoin (DOGE) also logged remarkable gains in yesterday’s trading session even without any support from Elon Musk who has been unusually silent about the coin for several months now. Related Reading: XRP Sluggish At Resistance – Will It Break Out After 2 Months Of Vertigo? SHIB total market cap at $9.12 billion on the daily chart | Source: TradingView.com Featured image from Analytics Insight, chart from TradingView.com
SHIBA INU (COIN:SHIBUSD)
Historical Stock Chart
From Nov 2022 to Dec 2022 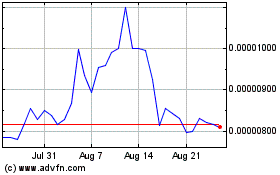 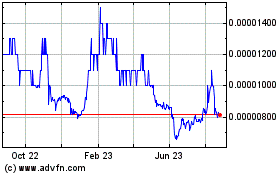 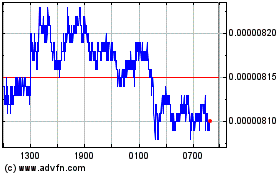